Saturday of Costume College, I wore my 1830s plaid silk dress (with the bonnet that was so big that I had to carry it on the plane), because I was wearing it for Jennifer Rosbrugh's Dressing the Plus Size Silhouette Class. I thought I remembered taking something earlier in the day than that, but maybe all I did was socialize, because I can't find anything on the schedule that looks familiar! After her class, I had signed up to take a class on Patterning from an Extant Garment, but it turned out they meant existing, not extant, and it wasn't suitable for fragile extant garments, so I left that class within the first 10-15 mins. 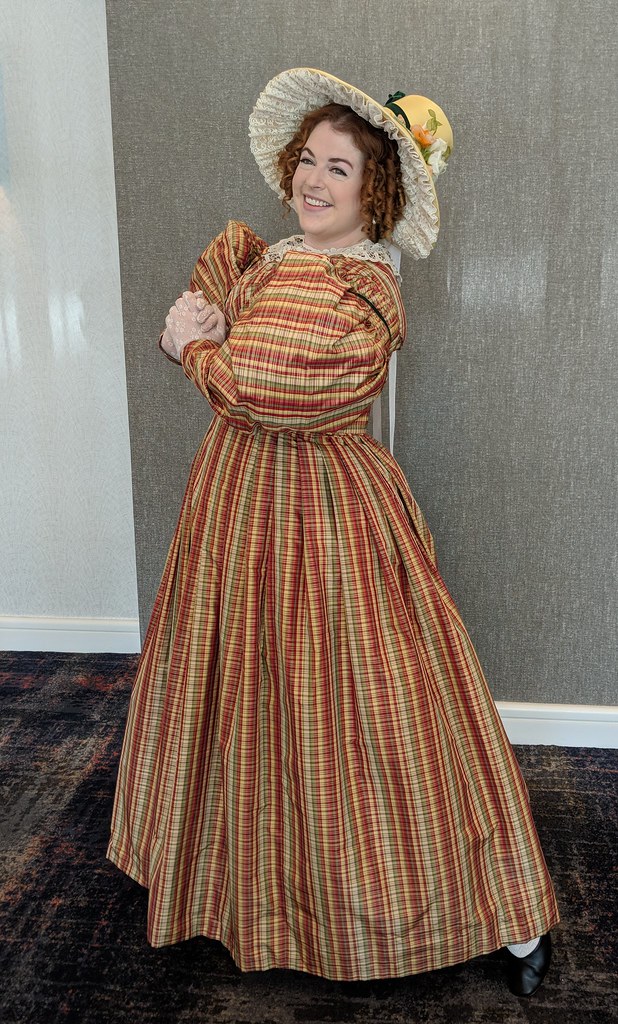 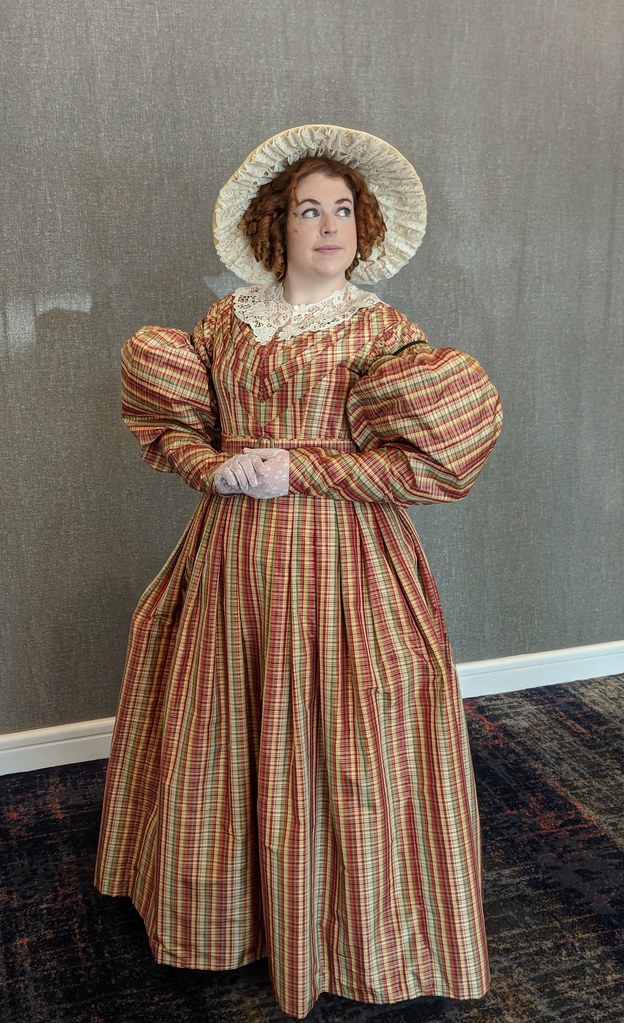 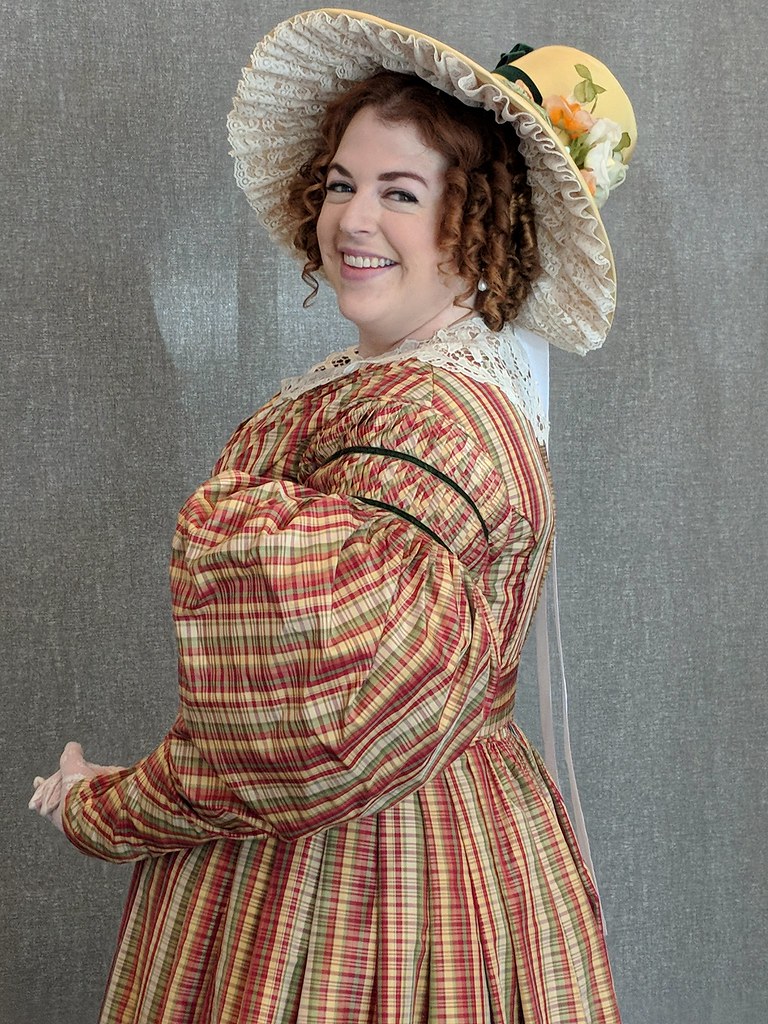 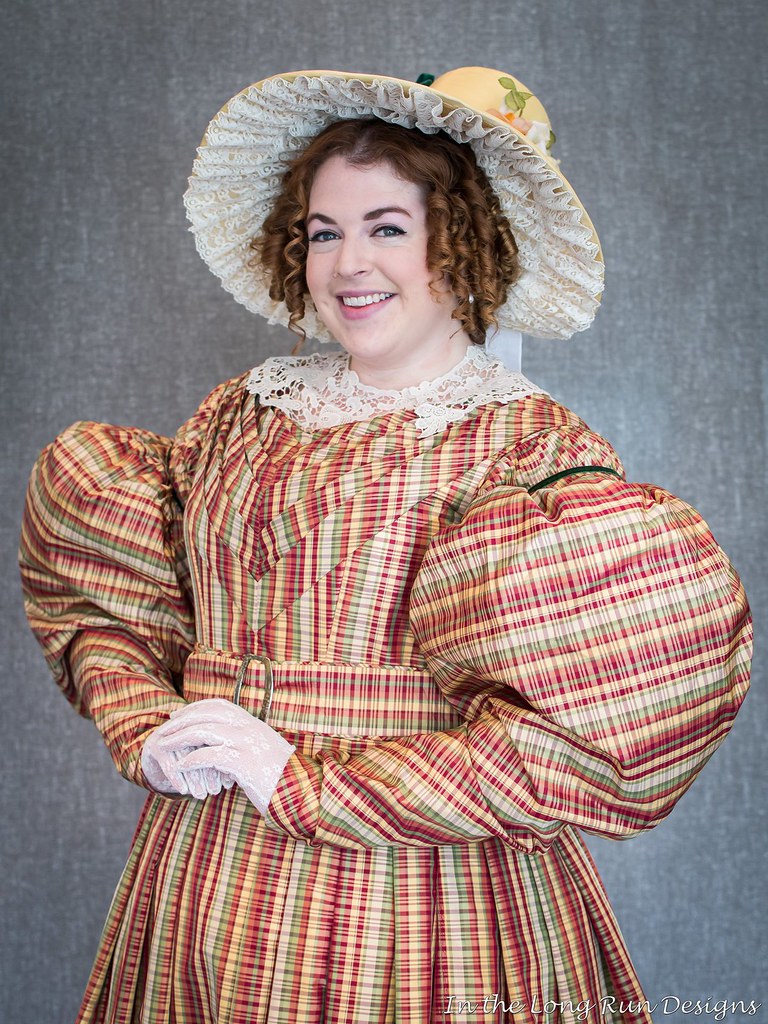 That turned out to be good, since it meant I could start getting ready for the gala. And for once, I wasn't running late! I wore my new yellow silk 1890s gown for the gala. I'm mostly pleased with how it turned out, but there's something about the fit and/or plainness of the back of the bodice that bothers me. I also styled my hair with all the tiny curls on the top of my head, since that's how you always see ladies of that era, but it was such an unflattering look on me! I wish I hadn't done my hair like that, because I'm not a big fan of how my pictures came out. We made the super-long trek to Maggianos for dinner, probably for the last time, since you can no longer walk through the mall, which made it a very long and hot walk. I ubered back, and unfortunately lost one of my shoe rosettes somewhere between Maggianos and the Marriott lobby, which is a bummer. I'll have to remake it for the next time I want to wear my Titanic deck dress. After we got back, we just hung out in the CoCo lobby area, chatting with people and taking pictures. We got a fun picture of (almost) everyone who was wearing yellow, which was a lot of people! 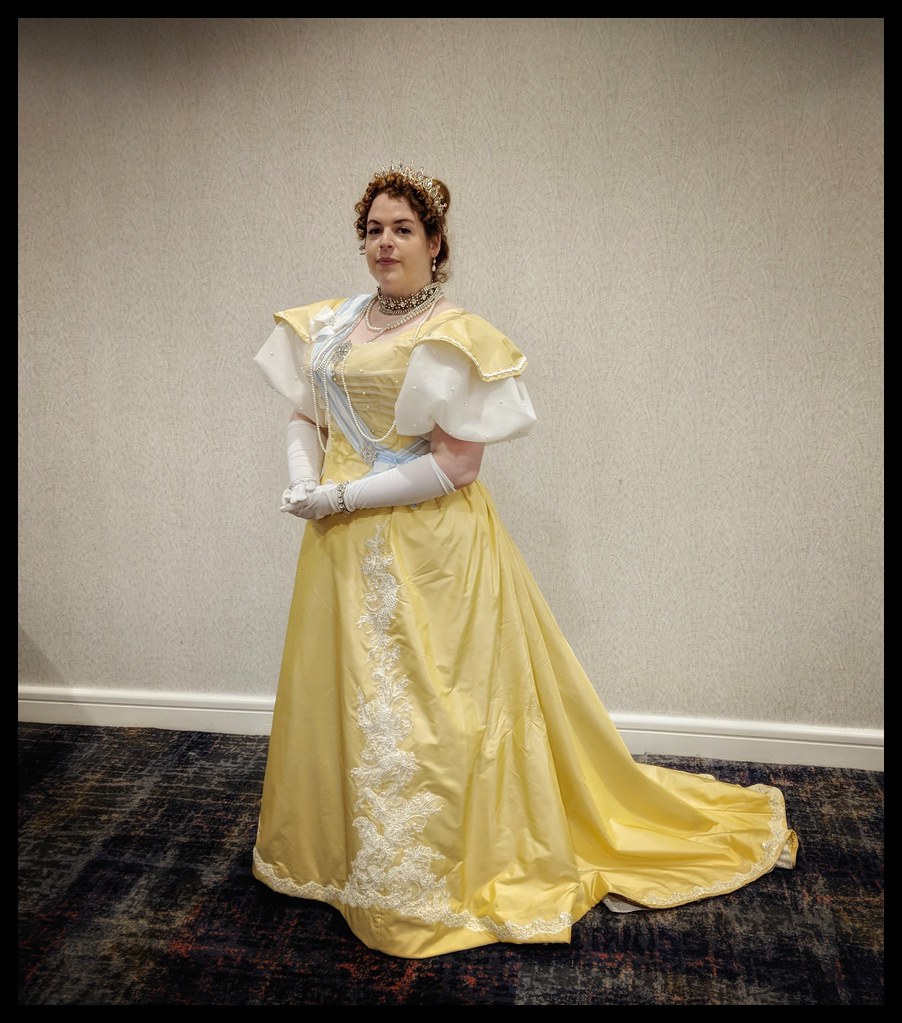 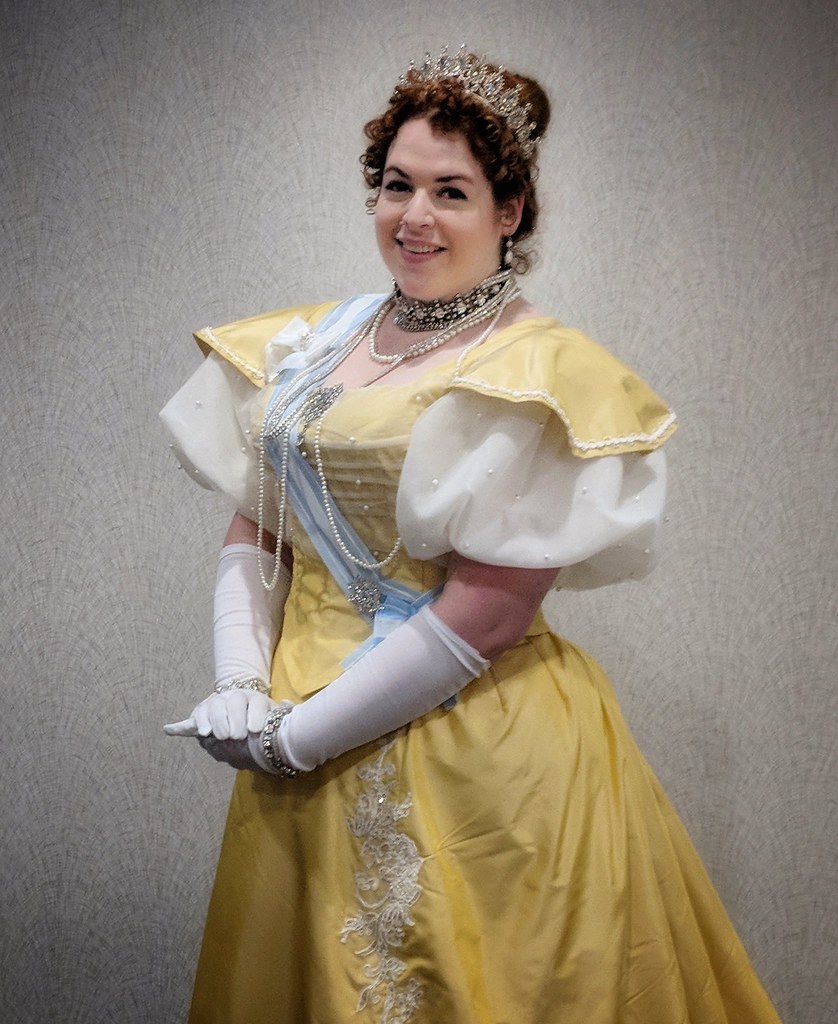 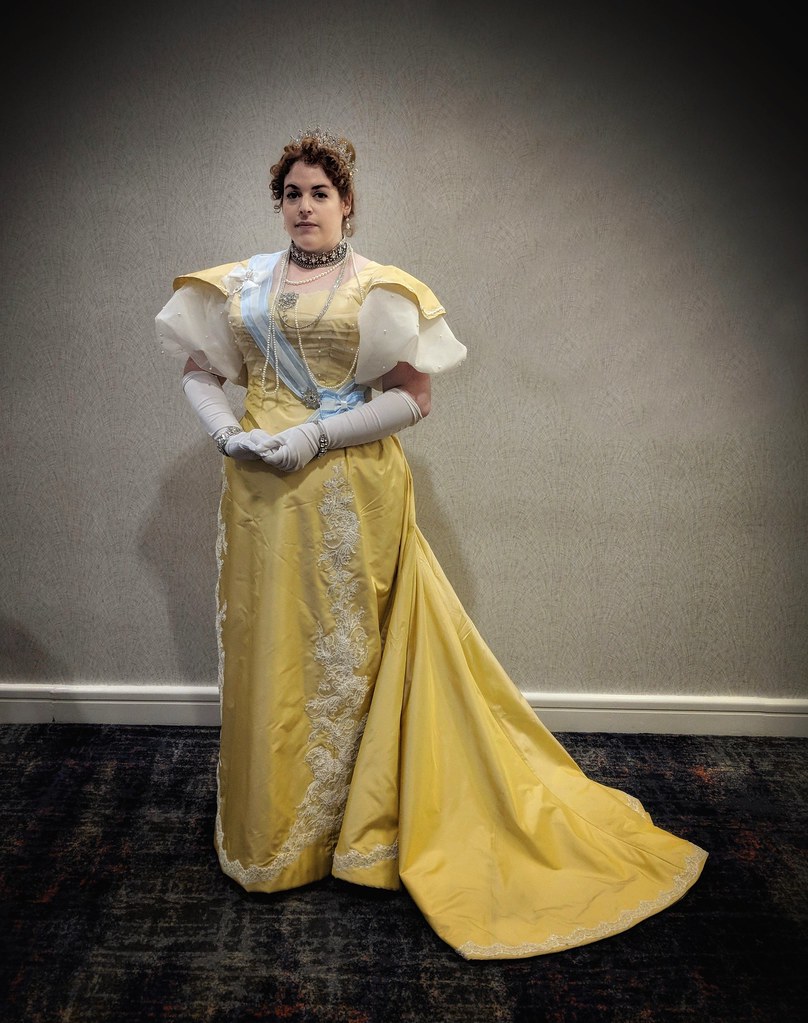 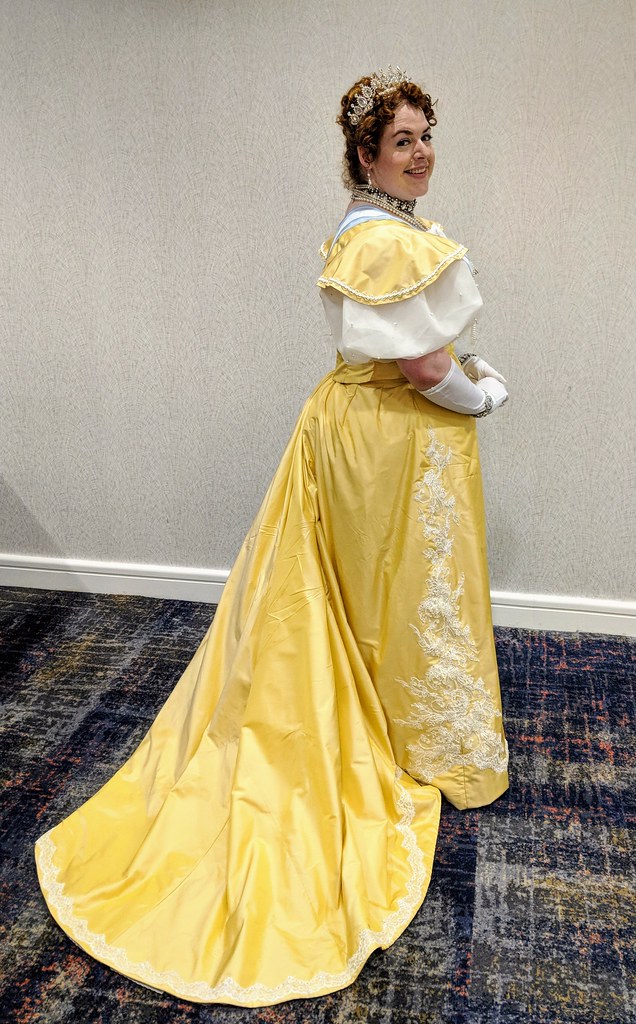 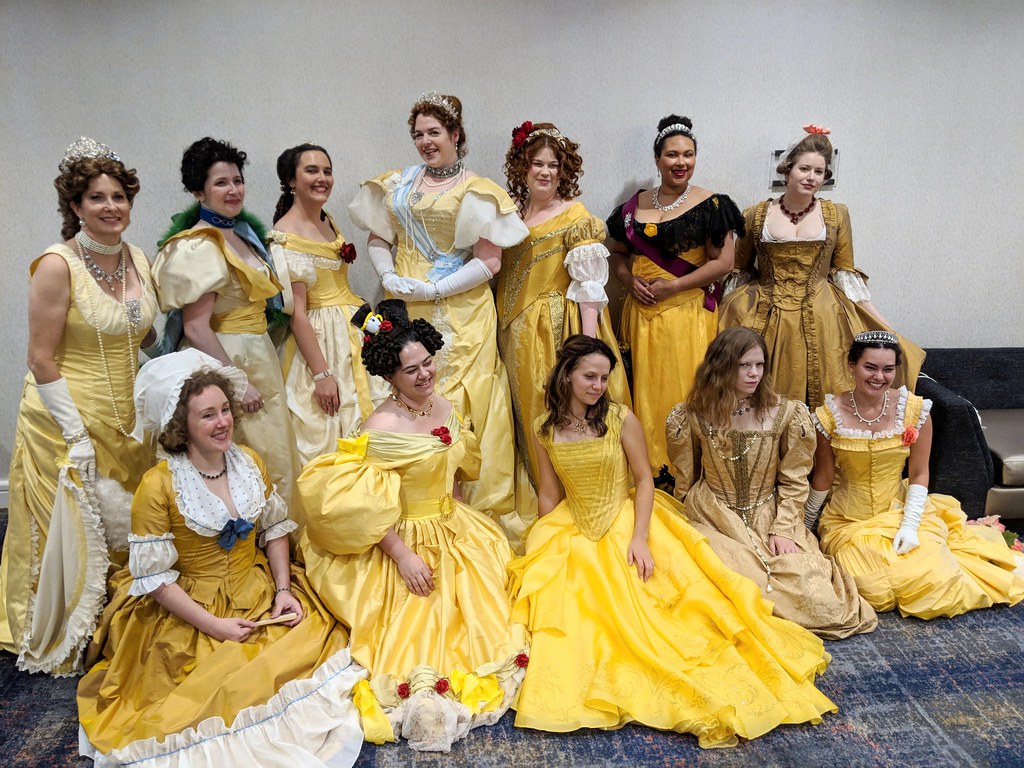 Eventually, we went to sleep, but definitely not early enough! I think I wound up getting about 4.5 hours of sleep before waking up for breakfast and the Bargain Basement on Sunday. I didn't get that much this year, but boy, they wanted to charge me an arm and a leg. Those estimators are ridiculous. I did talk them down significantly, but still paid more than I should have at "bargain" prices. The one thing I was really happy that I got was an extant 1860s bodice, so that was really cool. But no fabrics this year, which was unusual. I did manage to snag a few Truly Victorian type patterns, though, and a couple trims/laces.

For breakfast, the Bargain Basement, and my first class, I didn't have time/energy to wear the bustle dress I had planned for Sunday, but luckily, I made a Victorian-ish dressing gown, so I wore that over my corset/bloomers/petticoat all morning, then changed into the dress after my class. It was a great class! It was making and setting Elizabethan ruffs, and the two teachers each had a different great method for setting them, so it was really nice to learn both. I was so inspired by the class that I had hoped to be able to make one as soon as I got home from CoCo, but didn't wind up having time before the Ren Faire the next weekend, so that is on hold. But at least I have the linen and the know-how now. 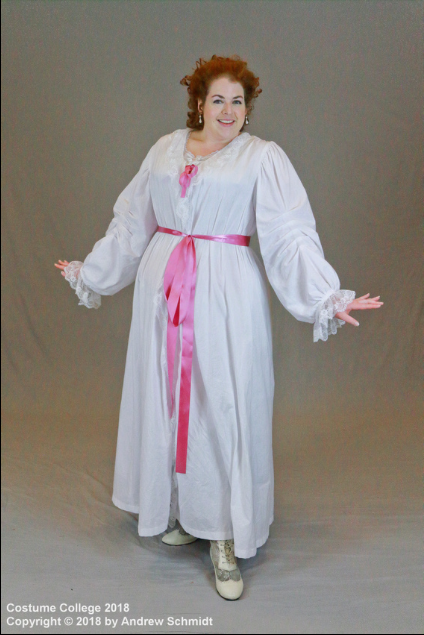 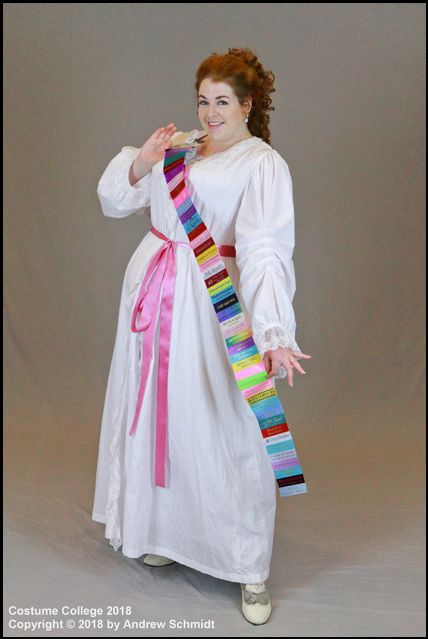 After class ended, I changed, had lunch, and spent some time socializing before taking my final class, which was Soutache: Mastering the Tangle. It was a really good class, but I doubt I'll really ever have the patience to apply it on a garment. It's really challenging. I did wind up going to the marketplace a few times over the weekend, too. I bought a whole ton of ribbon from the new ribbon vendor (such great prices!), a gorgeous early 1870s huge fashion plate in a frame (only $10!), and a busk, but totally forgot to go back to Richard the Thread the second day for millinery wire (they had run out by the time I got there the first day). So now I'll have to order that online. We ended the day at the pool (which is what we did Thursday night as well). It was so nice to get to spend so much time socializing this year! 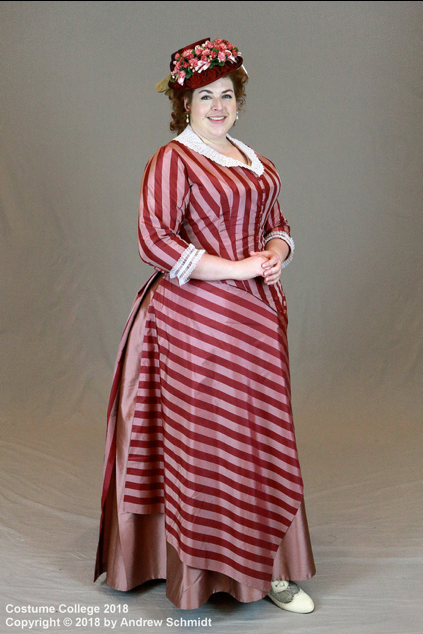 As you've read about previously on here, Monday's shopping trip was really a let-down, and I purchased almost nothing. Luckily, I did make up for that by the trip down there last weekend, so hopefully I will be mostly set for the year now. And I think I might start selling the silks I'm not as happy with anymore. In any case, I need to start making everything so that I'll be ready for next year's CoCo!